During the steam bending process the large knots that I thought I could work around came back to haunt me. The difference of grain direction, density, and moisture content of the knots compared to the remainder of the spindle resulted in some pretty crazy twists and bends in a few of legs. One was clearly beyond recovery and went into the burn pit while I did my best to address the others with some judicious filing and sanding.

It was only when I had ever so carefully drilled and tapered the leg holes in the seat did I discover that a second leg had an imperceptible twist at the tapered end – imperceptible, that is, until I mounted it. Maybe out by just a degree, maybe two, but it was enough to throw the leg out of alignment. Unable to see the problem but knowing it was there, with some incremental and careful filing of the tapered post I was able to correct for it.

So, the stool is assembled and, once the glue is dry, I will sand it and start to apply the paint. For chairs like these I use the white glue we used in school. It has a very long open time, which allows me to fit together complex assemblies without worrying that one end will dry in the wrong spot before I get all the pieces in place. 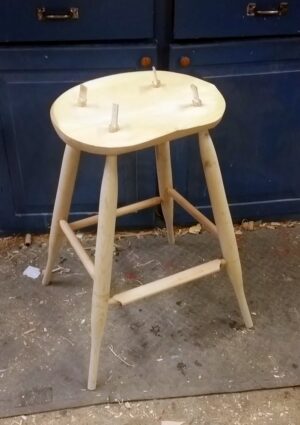 Assembled and tenons wedged. Just waiting for the glue to dry 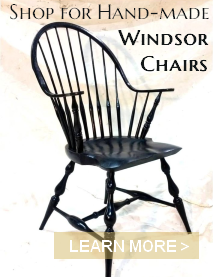